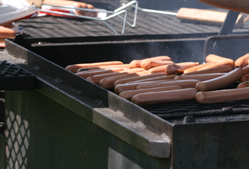 Thereâ€™s no need to explain why barbecues are done outdoors. Smoke in a closed room is anything but enjoyable, let alone safe. Safety, however, is also an issue outside the house, regardless of the outdoor or portable grills you use. Safety in this sense has nothing to do with fire or smoke inhalation. Itâ€™s about safe grilled food.

According to grilling tips from the University of Illinois Extension, marinating must be done indoors. Meat exposed to outdoor elements stands the chance of attracting bacteria. Freezing and grilling are guaranteed to kill the stragglers.

Cooking temperature is instrumental in eliminating bacteria or preventing new ones from breeding. This varies for different kinds of meat, ranging from 140 to 165 degrees Fahrenheit. With a heat output of 14,000 Btu, cooking appliances like the portable Solaire grills can reach the proper temperature for cooking meat safely. Most beef cuts will cook at 140 degrees, but burgers and other ground meat mixtures require 165 degrees.

Some cuts of meat need to cool for at least three minutes after grilling before serving. Beef and pork are examples of this. During this period, the temperature inside the meat continues to rise, killing more bacteria in the process. Donâ€™t let grilled meat drop below 80 degrees as it might attract bacteria. If the climate is warm enough, serve the meat within an hour. 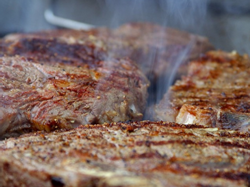 If the bacteria in food wonâ€™t harm you, the carcinogens in smoke might. High temperatures cause chemical reactions in meat, forming two cancer-causing agents: polycyclic aromatic hydrocarbons (PAHs) and heterocyclic amines (HCAs). PAHs and HCAs increase the longer the meat stays on the grill.

To avoid exposing the meat too long on the grill, cook the meat beforehand. Popping meat in the microwave for at least five minutes will help draw out the PAHs and HCAs. Put the meat on the grill immediately after precooking to retain its heat.

Grills tend to get dirty after each use. Gas types do not produce as much charred stains as other grills, but it builds up grease. Traces of grease may trigger the formation of carcinogens the next time you fire up the grill. Clean grills to prevent the buildup of PAH and HCA.

Grilled food is good when you know itâ€™s safe. With the right method and equipment, like the portable gas grills from Solaire, safe grilled food is possible.

How To Compare I.R. Grills

Grilling is a time honored tradition in our nation. Whether you use gas or charcoal, firing up that grill is a relaxing, enjoyable way to spend an afternoon or evening. That said, there’s a better option on the market today than either gas or charcoal.

Try Before You Buy

The Demo Program helps consumers eliminate their frustrations and concerns by helping them sort through the different issues about gas grills so they can make the right decision.