Grilling with Carbons: Why a Portable Gas Grill Cannot Cook Steak Without It 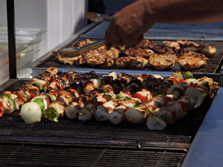 You canâ€™t grill without carbons. It doesnâ€™t get as simple as that. For most of the grilling process, carbons are involved. From the fuel used to fire up the grill to the smoke it emits, carbons are there every step of the way. It may sound odd at first, but it takes a closer look at the dependable portable gas grill to know carbons better. For starters, this element is not as bad as you think (but too much of it in the atmosphere is a different story).

Propane is a simple name for C3H8, which means it has three carbon atoms and eight hydrogen atoms. Itâ€™s one of three hydrocarbons mainly used in grilling; the other two are methane (CH4) and butane (C4H10). Propane is the most widely-used fuel for barbecues. It usually comes in liquid form stored in a small tank.

In terms of energy output, however, butane has the highest yield of the three at 126 Megajoules per cubic meter (compared with propaneâ€™s 96). However, butane doesnâ€™t work well when grilling in the cold as it tends to become cooler the more the grill uses it. Propane can hold itself in the winter months, giving grillers all-year grilling capability.

When propane reacts with oxygen, it produces carbon dioxide, water, and heat. Carbon dioxide is an essential part of nature; plants need it to produce oxygen which will be used by the grill to produce more CO2 again. The only time when carbon in grilling becomes harmful is when thegrill fails to burn propane completely, emitting carbon dioxideâ€™s more harmful sibling, carbonmonoxide. 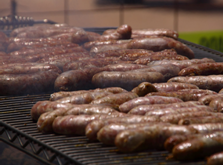 As carbon is a core element of life, yet people today are careful not to add more to the air they breathe, many reliable built in grills, such as those designed by Solaire, keep the footprint to a minimum. These grills wonâ€™t take out carbon entirely but they will cut the amount of carbon sent to the atmosphere. Infrared grills are notable examples of appliances that keep carbon emissions low.

Infrared grills still use gas, but donâ€™t produce flames. Instead, the grills heat a ceramic plate that emits heat via radiation. As thereâ€™s no fire, the grill produces less smoke than the regular propane grill. Nevertheless, the fact that it runs on the same source of fuel proves that carbon is a key player in grilling.

How To Compare I.R. Grills

Grilling is a time honored tradition in our nation. Whether you use gas or charcoal, firing up that grill is a relaxing, enjoyable way to spend an afternoon or evening. That said, there’s a better option on the market today than either gas or charcoal.

Try Before You Buy

The Demo Program helps consumers eliminate their frustrations and concerns by helping them sort through the different issues about gas grills so they can make the right decision.